Six students experienced two aquatic-focused projects at Shaw Nature Reserve on a hot and humid day.  In the morning data was gathered on fish in the Pinetum Lake.  Students spent the first half of the morning catching as many fish as they could using a rod and reel. Many bluegills were caught along with a few large-mouthed bass. 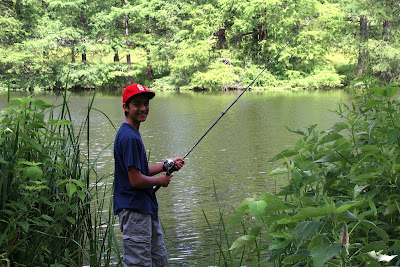 Data including species identification, length and population numbers were collected on the fish before they were returned back into the lake.

After lunch the students loaded up the truck with their gear and headed down to the Meramec River where they conducted water quality testing as part of the Missouri Stream Team program.  They first conducted a site survey looking at vegetation along the banks, evidence of people, quality of the stream bed with a focus on algal and sediment coverage on cobbles and rocks, and color and odor of the water.

Once the visual survey was completed, students conducted water quality tests that included dissolved oxygen, pH, nitrates and phosphates, water temperature and turbidity.  The final procedure involved the collection of macroinvertebrates using a kick-net. There was an abundance of stonefly, mayfly and caddisfly nymphs as well as a few crayfish. Using a metric provided by the Stream Team Project, they were able to determine that the water quality was very good. Once all of the data was collected, students returned to the office to enter their results on the Stream Team database.

Dr. Laura Catano and Dr. Robert Marquis, both from University of Missouri - St Louis, needed some high school students to assist them in testing a citizen science program focusing on invasive oak weevils.  Basing out of the Trail House, nine SIFT students were trained in the protocol of the project.  They were then divided into small teams and sent out into the woodland to collect the weevils.  Field work included identifying the host trees to sample, identifying and counting insects on host plants, and counting leaves on sample branches.  After the collecting, students gave feedback to the leaders as to the ease of understanding the instruction and in the identification of the weevils.


On their way back to the Visitor Center, the group made a quick stop in the Sense of Wonder Woodland to play on some of the made-from-nature features. 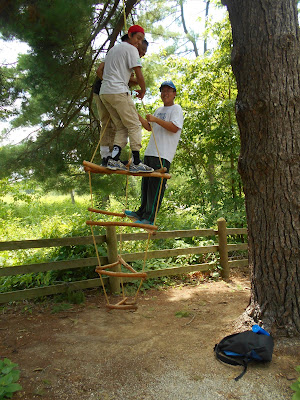 This morning, students had the opportunity to study ant behavior. After some general information about the test procedures, students were given two types of bait; a cantaloupe rind and a Pecan Sandy cookie. They also had an identification chart of the ants that were most common to the area. Their instructions were to set up their bait in several places around the center and to observe and record what happened. Which ants come to the bait first? Do they recruit other ants? What happens when two species encounter each other? Do they fight or does one species get chased off?

After a morning of observation, the students were tasked with coming up with a researchable question about ants and then asked to design a research project around their question. Some of the questions that intrigued them most involved food choices, reaction to different light sources, and the effects of heat on life cycle development. Their presentations generated interesting conversation and everyone left with a better understanding of ants!


Before ending the week we celebrated our first  week of SIFT with ice cream sundaes. A great way to end a very hot but exciting week!
Posted by Lydia at 5:00 PM No comments:

The focus today is on the land...the prairie, glade and woodland.  The day started with students getting practice with dichotomous keys as they identified different plant structures.

Students were then ready to start their ecosystem investigations after some instruction from James Trager.


Hula hoops would be used to determine the study site.


After moving into the lodges for the overnight students gathered back to watch a fascinating DVD on ants presented by the famous entomologist and naturalist, E. O. WIlson.  This provided some background information in preparation for tomorrows ant study. Later, students had the opportunity to talk with some visiting scientists before and during dinner and ended the evening with a night hike, campfire with s'mores, and black light viewing of insects.

The third day of the SIFT training week was focused on aquatic systems. The group visited Wolf Run Lake in the morning and Brush Creek in the afternoon. They performed water quality tests at the sites and sampled for organisms in the habitat, recording richness (number of species) and abundance (number of individuals of each species) in their field notebooks. They used these numbers and the species they found to predict whether the systems were healthy or polluted.

After most of the day outdoors, we returned to the Overnight Center where students prepared their presentations on the results of their testing.

Good news -- everyone agreed that both aquatic systems are healthy!

This day is all about observation. Although it was a hot morning, it was pretty comfortable as we worked under the Glassberg Family Pavilions.  After starting the morning off with some nature sketching, we moved on to close observation of isopods - better known as pillbugs and sowbugs. Students were asked to draw the isopods with as much detail as possible.  We then spent some time compiling the observations and noting questions that we had.  How do they eat? Do they lay eggs or give live birth? And many more! From there we moved on to looking at similarities and differences and students developed dichotomous keys using leaves from 10 species of Missouri trees.


After a busy morning it was time to switch gears and prepare for the aquatic study on the next day. Students learned how to use the digital probes to record dissolved oxygen, water temperature and pH and also became familiar with using the chemical test kits for phosphates and nitrates. The day ended with students participating in simulations that presented a water quality issue.  Their goal was to determine what the cause of the issue was using the information that was given them.

This week is the training week for Cohort 9 of SIFT! Cohort 9 boasts 27 SIFTers from 19 schools, and they all made it to day one where they started off the week getting to know each other and getting comfortable at Shaw Nature Reserve.

We started the day with an overview of Nature Reserve and what to expect during the week, then moved outside for some icebreakers. Our discussion of field safety began with seeing who shared our opinions on what falls in our comfort, challenge, and panic zones and ended with examining live ticks in plastic boxes. Dr. James Trager gave a presentation on what exactly field biology means, and the SIFTers got to know each other more over lunch. After lunch, everyone got some practice with GPS units, navigating with a compass, and reading topographical maps before being sent out into Shaw to complete a challenge course in small groups.

The students were divided into 4 teams and were given different routes.  Teams following the yellow route were able to travel through woodlands and the Meramec River bottomland while those following the green route passed through wetland, tall grass prairie and woodland. 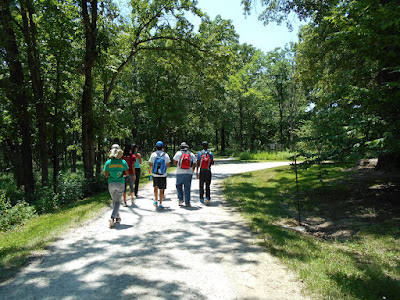 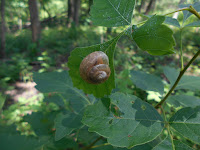 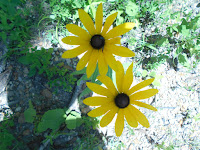 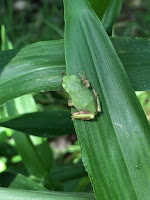 They had to stop along the way to make sure they were traveling in the right direction.... They passed through several habitats....

All groups checked in at the Trail House right on time and were rewarded with some nice cold lemonade.  It was a good first day!

As part of a continuing tradition after the TERF Symposium at Tyson, the TERFers joined the SIFTers at Shaw Nature Reserve for an overnight.

Before dinner on Saturday evening, the SIFTers rotated through casual conversations with the TERFers, fire ecologist Dr. Rae Crandall, anthropology graduate student Kelsey Nordine, and World Bird Sanctuary naturalist Tess Rogers. Rae has hosted many SIFTers and TERFers on her research projects over the years and Kelsey is looking to include SIFTers in her dissertation research soon. For Tess it was a homecoming since she is a SIFT & TERF alumnae from the very first cohort. We were thrilled that she was able to bring an owl with her! 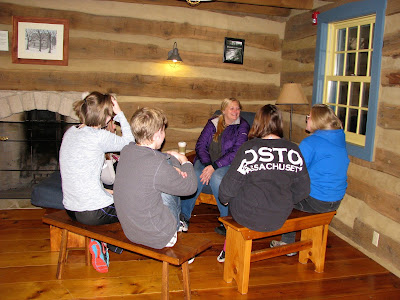 On Sunday morning, the SIFTers learned about winter ecology with Dr. James Trager while the TERFers hiked down to the Meramec River to survey the flood damage. 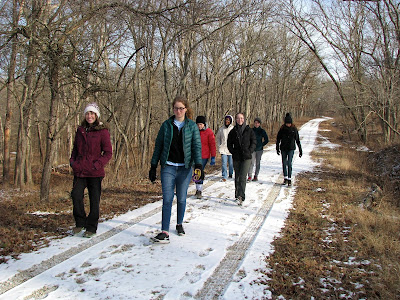 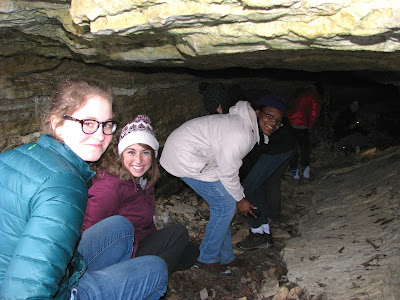 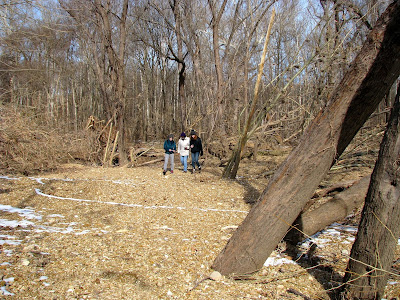 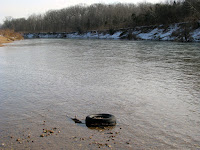 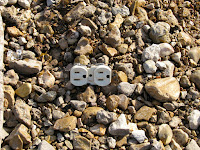 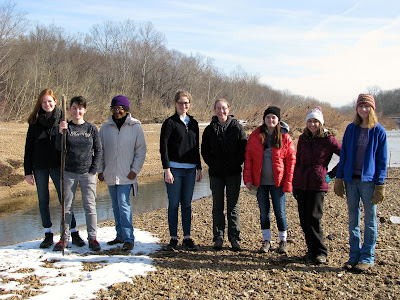 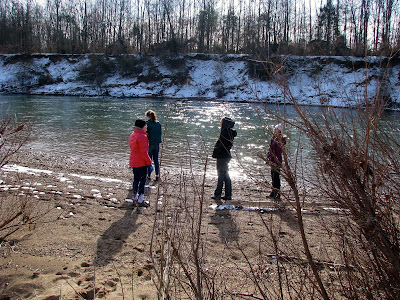 Posted by Susan K. Flowers at 5:00 PM No comments: 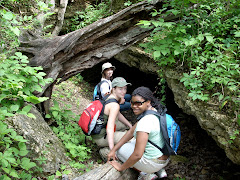 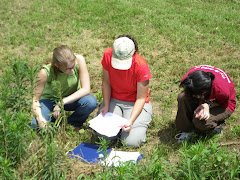 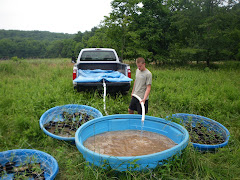 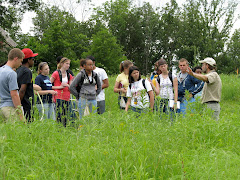 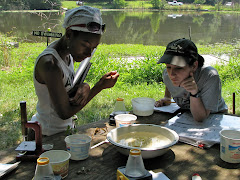 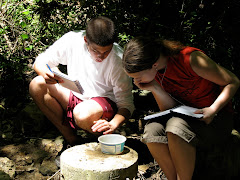 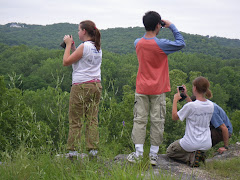 This blog hosts descriptions of the development and implementation of a National Science Foundation Informal Science Education project that forged a partnership between Tyson Research Center and Shaw Nature Reserve.